Being behind the microphone offered many opportunities to “rub shoulders” with some of the top guns in the World of Entertainment. During my time in radio, I was fortunate enough to meet people like Nat King Cole, Johnny Ray, Eartha Kitt, Tom T. Hall, Slim Dusty, Winifred Atwell even Col. Sanders of Kentucky Fried Chicken fame, but one name I was able to actually work with was Harry Secombe the famous “Goon” – funny man extraordinaire – and brilliant tenor – what a thrill it was when I was asked to introduce Harry on Stage at Adelaide’s State Theatre – where he was to draw the lucky winner in a 5DN Competition – all went well until the lock on the barrel containing the thousands of entries jammed – Harry had the audience in fits of laughter as he clowned and joked his way through until the reluctant lock freed itself – surely this was one of my most enjoyable moments – being able to work with and meet such a charming person as the famous Harry Secombe. 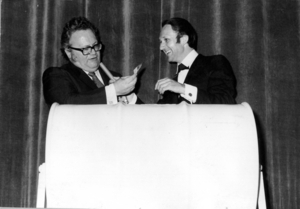