A CAREER IN RADIO BEGINS ...

When I first entered the radio industry the usual way to achieve your dream (Mine was to become an announcer) was to start as office boy.  This entailed running messages, making coffee, buying the boss's lunch, operating the switchboard, and the most exciting 'chore' watching the announcers at work from behind a glass window.  I remember how these people looked entirely different from what I had imagined when listening to them at home on our radio or as we called it then the "Wireless".

After carrying out my office boy duties for 3 months or so I was called in one day and told, because of my good work and enthusiasm, I was to be promoted to 'Presentation Officer" -  This meant I would be actually working with the announcers, behind that same glass window that I had gazed through so many times before. Being a presentation officer meant the announcers would introduce programmes and records, and I would play them.  My little studio featured 4 turntables, the top two of which were to play the serials and big network shows, which came in the form of 16 inch recordings, (called transcriptions) and the two bottom tables were for the 78 rpm records which required a new needle for each playing - what a job!  I happily did this job for some years over many shifts, as I aspired to move over one more pane of glass to the announcers' microphone ... 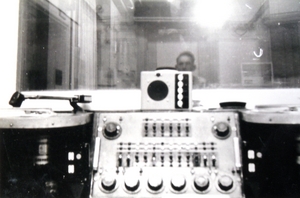